From Baby Boomers to Millennials: Understanding the future of inheritance tax

This article from Mark Taylor, Partner, Beringea and ProVen Legacy, originally appeared in full in the FT Adviser – How to carry out inter-generational planning

The UK is facing an inheritance tax time bomb. The ‘Baby Boomer’ generation is approaching retirement age, and many have parents in good health as well as children or  grandchildren who they want to help financially. As a result, many families are facing the prospect of having to plan for not one but two inheritance tax (IHT) bills over the next 10 years.

It‘s natural for parents to want to pass on their hard-earned assets to their families. Increasingly many are looking to spread the load of inheritance across generations. For example, a recent Royal London survey predicted that grandparents helping younger family members financially, before and after they die, could result in a potential ‘cascading wall of wealth’ worth as much as £ £400 billion.

However, while these families may consider themselves comfortable, many may not be aware that they fall into a bracket of wealth that means they may be liable to pay significant amounts of IHT. With allowances frozen since 2009 and asset values rocketing, individuals are facing a perfect storm of factors that have increased the value of their estates, but may also reduce the amount they are able to pass on. This is not tax-driven, it is not an attempt by the government to take money out of people’s pockets, it is simply because the number of people with assets above the threshold has dramatically increased.

To solve this problem, we need to understand why many families may not realise they are affected. The reason for this potential IHT spike is largely due to the record rises in house prices – which has drastically increased the number of individuals liable. Overall, the average cost of a house has increased 34 per cent since 2009. There is also the value of other assets individuals may own. Take the FTSE 100, which opened in 2009 at 4,434 and at the time of writing is at 7,414, an increase of more than 67 per cent. Individuals with even a relatively small portfolio of stock market investments may not realise that, combined with their other assets, they are above the IHT threshold.

For consumers, this is a major area of education. There is a lot of misunderstanding among even informed consumers about what an individual’s IHT allowance is. Many people believe that a couple’s joint allowance is £1 million. In fact, it will only reach that in 2020. Many do not realise that these allowances are dependent on owning or having owned a property, so if the majority of wealth is in other assets, such as stocks and shares, individuals may be liable for more than they think. There is also a lack of understanding that these allowances can only be transferred to a spouse or partner, and that they only apply if the estate is inherited by a direct descendant. This crucially means those who would like to leave their estate to people other than their children, will lose out on any IHT property relief. In addition some people may not realise that the property allowance is also tapered for estates worth more than £2 million – reducing a couple’s IHT free £1 million by £1 for every £2 over the threshold.

While more than a third of over-55s are concerned about IHT, only one in five has actually sought financial advice to help them reduce their potential tax bill. As a result, too few of people are making use of the variety of tools that can help reduce the bill that family and friends may face. Add to that the fact that many in this generation are still caring for both parents and children or children and grandchildren. To solve this there is a need for more financial education, IFAs can play an important role in this however, they need to do more to reach all generations rather than focusing on the older age groups.

So, how can IFAs help parents and grandparents mitigate inheritance tax while supporting their children and grandchildren now, as well as protecting their own financial security?

There are a number of financial tools both the well-known and some that this group may not be aware of, such as Agricultural and Business Property Relief. 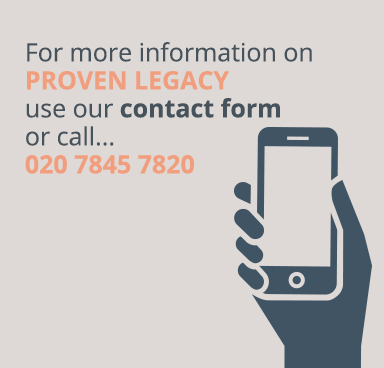 The communication on this website is only directed to those persons in the United Kingdom who are within the definition of Investment Professionals (as defined in the FSMA (Financial Promotions) Order 2005)*. Accordingly, this communication is directed only at persons having professional experience in matters relating to investments.

*As Shareholders of the Company have passed a resolution to allow the Company to use its website to publish statutory documents (such as the annual report and accounts) and communications, Shareholders may only view the website in this limited capacity unless they also fall under the category of Investment Professional.

ProVen Legacy plc is advised in its lending activities by Beringea LLP, an experienced investor in SMEs, based in the UK which is authorised and regulated by the Financial Conduct Authority (FCA). Beringea LLP’s FCA Firm Reference Number is 496358. Beringea is not a tax advisor and nothing on this website should be construed as tax advice.

An investment in ProVen Legacy plc should be based on all the information in the Prospectus, including the risk factors set out in the section headed “Risk Factors”. The Prospectus is available to download from this website, www.provenlegacy.co.uk.

To comply with the requirements of the Data Protection Act 1998, we adhere to strict security procedures and have taken all appropriate measures to ensure that no unauthorised disclosures of your details are made to a third party without your permission and unauthorised access to it is prevented.